Share a memory
Obituary & Services
Tribute Wall
Read more about the life story of Alba and share your memory.

Alba L. Gayeski, of Ithaca, New York and formerly of Kingston, Pennsylvania, passed away peacefully in her hundredth year on January 18, 2023.

Born in Pittston, Pennsylvania, the daughter of Dominic and Sestina Fioretti Lori, Alba graduated from the high school there as valedictorian of her class. She received a B.A. with honors from Marywood University and pursued graduate studies at Wilkes University. She briefly taught art at Whitesboro High School in Upstate New York until her fiancé, Edward C. Gayeski, was discharged from the Army. They were wed soon after and they spent their married life in Kingston, Pennsylvania and their lakeside vacation home in the Pocono Mountains.

Together, Alba and her husband founded Rex Craft Associates, a commercial design, construction, and furnishing company; they were responsible for over nine thousand installations in the U.S. and the Caribbean. Listed among the top designers in the nation and the recipients of many design awards, they traveled extensively and attended many cultural exchanges sponsored by the American Society of Interior Designers, of which they were professional members. They later founded Rex Craft Realty and were involved in redevelopment and building throughout Northeastern Pennsylvania. They were honored by three Chambers of Commerce for their work.

A prolific painter herself, Alba also supported the arts and established a scholarship and a medal for excellence in design at Marywood University in memory of her husband. In retirement, she found time to write a book about her mother’s life and to translate and illustrate some notable stories from Italian literature. For the last eighteen years, she resided at Kendal, a retirement community in Ithaca, New York, where she contributed her expertise to the Interior Design Committee, created and maintained a flowerbed in the courtyard, and nurtured Italian flat beans brought as seeds from Italy by her father.

Along with her husband, Alba was predeceased by her siblings Arthur (Anna) Lori, Archie (Helen) Lori, Aldo Lori, and Aura (Leroy) Sabbatini. She is survived by her only child, Dr. Diane Gayeski, of Ithaca, New York, a professor and former dean of Ithaca College’s Roy H. Park School of Communications; and by her only grandchild, Evan D. Williams, and his wife Savannah Williams, of Pony Hollow, New York.

On January 28, 2023 at 10 a.m., a Requiem will be held at St. Joseph Marello Parish at Our Lady of Mt. Carmel Church in Pittston, Pennsylvania, where Alba was so happily married. She will be laid to rest beside her beloved and devoted husband in a private ceremony.  In lieu of flowers, donations may be made to the Edward and Alba Lori Gayeski Scholarship at Marywood University.

Funeral arrangements have been entrusted to Bangs Funeral Home, Ithaca, NY. Online condolences may be made to Alba’s family at www.bangsfuneralhome.com.

To send flowers to the family or plant a tree in memory of Alba L. Gayeski, please visit our floral store. 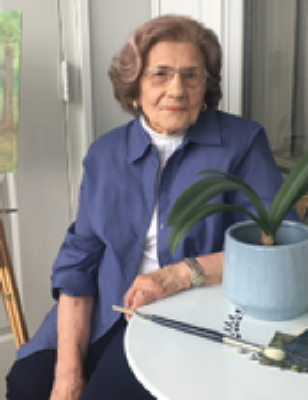