Share a memory
Obituary & Services
Tribute Wall
Read more about the life story of Jianjun and share your memory.

Jianjun (Jeff) Tian passed away on January 21st, 2023 at the age of 62 after a courageous battle with cancer. He was surrounded by his family who will continue to honor his legacy by living their lives with intention and to the fullest.

Jianjun was born in Liaoning, China on August 1st, 1960. His hard work ethic and unrelenting belief in himself propelled him from a small rural town to Shanghai for college. He graduated from China Textile University, and completed his M.S. and Ph.D in polymer science there in 1989, one of the first among his generation to do so. After working as a research engineer and associate professor, Jianjun emigrated to Canada to pursue a postdoctoral position at McMasters University in 1993. In 1998, he and his family moved to Ithaca, NY where he worked as an engineer on developing plastic injection and compression mold simulation software at CMOLD, Moldflow, and Autodesk. His search for a better future for himself and his family led him on an adventurous journey across the globe.

Despite flying all around the world, perhaps his favorite mode of transportation was cycling, having once asked his father if he could buy him a bike after graduation to bike 1,800 km home from Shanghai to Fushun. Jianjun loved to bike, and even completed a 100 mile loop around Cayuga Lake. He enjoyed going to the movies with his wife, attending his sons’ basketball games, and taking on various home improvement and landscaping projects. He was a family man who enjoyed the simple things in life. In his 62 years he witnessed the world change rapidly around him, as he transformed the lives of those around him.

Jianjun is survived by his wife Yuxin, his sons David and Kevin, his mother Yurong, his father Li, his brother Weiping, his sister Xiaowei, and family and friends dispersed around the world. A celebration of life is scheduled for 11AM on January 28th, 2023 at Bangs Funeral Home. Online condolences may be made to Jianjun’s family at www.bangsfuneralhome.com. In lieu of flowers, Jianjun’s family would welcome donations to Cayuga Medical Center, where he had most of his post-surgery treatments, in his memory.

To send flowers to the family or plant a tree in memory of Jianjun Tian, please visit our floral store.

Video is available for this event 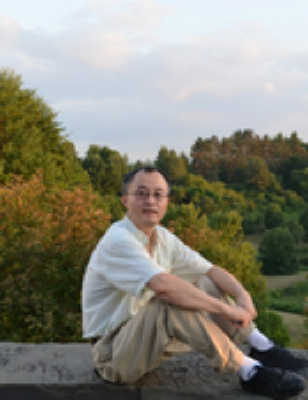