Share a memory
Obituary & Services
Tribute Wall
Read more about the life story of Natasha and share your memory.

Natasha Tall died peacefully at home on January 7, 2023. She was 95 years old. Natasha was also known at various times in her life as Pony, Pepette, Miet, Chacha, Mami, Grammy, the Mayor of Court Street, and dear, dear friend. It does not quite seem possible that such a vibrant and elegant human being, such a force of nature, un personaje, could no longer be with us. Wherever she has gone to next, there will be love and laughter, and her beloved husband Don. She will surely be pushing that bright red shopping cart, and stopping to chat with everyone along the way.

Natasha will live on in the hearts and minds of her two daughters, Diana Lamphier and Kristina Andersen, her granddaughter Jesse Laska, her son-in-law Shane Lamphier, her cousins Carol and Itai, her niece Harinama, her nephew Jorge, and her many friends who basked in the glow of her warmth, kindness, and youthful spirit.

Such a long life well-lived cannot be neatly summarized. There are stories, so many stories! Here are the nuts and bolts: Natasha was born Naomi Stephanie Goldberg in Astoria, Queens on April 25, 1927. Her mother was Eleanor Cecilia Rottman, and her father was Joshua Louis Goldberg. Her older sister was named Josephine. They left to live in Lausanne, Switzerland when Natasha was just 2 years old, so French became her mother tongue. She returned to the U.S. at the age of 12, as Europe became too dangerous for Jewish families. She attended Northfield Mount Hermon and Denison University, where she acted in many theatrical productions. After college, Natasha worked as a secretary.

Natasha married Gustavo Andersen in 1953, and lived with him in his native Argentina for 2 years before returning to the U.S. She raised her 2 daughters in Hollis, Queens. When they were young, she decided to return to work, and although she had never taught or taken an education class, Natasha, with her ever present chutzpah and charisma in hand, was hired as a French teacher at Woodhull Preparatory, a private school. She later worked at 3 other private schools as a French and Spanish teacher. She was immensely creative and well loved by her students.

After Natasha and Gustavo divorced, Natasha married Donald Gerard Tall in 1975, which was also when she changed her name from Naomi. He was a most wonderful, funny man, her soul mate. She decided to stop teaching and return to secretarial work in the mid 80s. Being Natasha, she of course ended up working for Christian Dior in Manhattan, as she could easily talk to offices in Paris or Buenos Aires!

After retiring, Natasha and Don moved to Ithaca, NY in 1994. Sadly, Don passed away in 2000. In Natasha’s grief, there was also a great blossoming - volunteering, singing with a local chorus, writing (poems, a self-published children’s book, and short stories that she read to a variety of audiences), creating art, and acting. Natasha joined various theater troupes, and was the “go to” actress asked to play older women characters in numerous Ithaca College senior student short films. She also was a main character in “Invisible Ink”, a full length locally produced movie. Natasha taught French and Spanish to private students and to seniors at Lifelong. She enjoyed close friendships and was thrilled to become a grandmother during this time.

And then…. After a long run of good health in old age, her body slowed down, her memory faded, but Natasha’s sharp and impish sense of humor was with her to the end. A year ago, Natasha had to move out of her cherished home on Court Street to nearby Brookdale Senior Living. Although it was a hard transition, in the end, it became home, and home was where she left us in body, but not in spirit.

A Celebration of Life for Natasha Tall will be held on Saturday April 15, at Lifelong, from 2:00 pm to 4:30 pm, with remembrances at 3:00 pm. Lifelong's address is 119 W. Court St. Ithaca, NY 14850. In lieu of flowers, please consider donating generously to Hospicare of Ithaca. They are angels.

Funeral arrangements have been entrusted to Bangs Funeral Home, Ithaca, NY.  Online condolences may be made to Natasha’s family at www.bangsfuneralhome.com.

To send flowers to the family or plant a tree in memory of Natasha Tall, please visit our floral store. 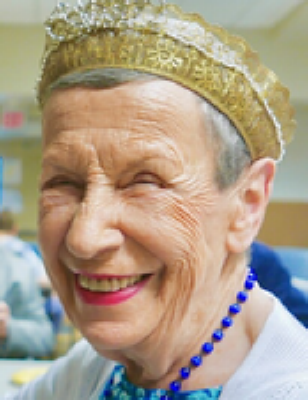